Genealogy of the Descendents of Charles Cox who settled Onslow County, North Carolina in 1741
The information below is reprinted with permission of the family of Woodrow W. Cox from The Heritage of Onslow County © as published in 1983 by Hunter Publishing Company of Winston Salem. The publisher encouraged families in Onslow County to write educational materials about each family. The copyright is held by the Onslow County Historical Society and is reprinted here as educational materials. The family tree information and certain other information printed are public domain facts. Remarks in blue text are added (as is the circa 1913 photograph and other graphics).

Children of Mary and Arthur Cox:

The Charles Cox family story begins when he settled on the northeast side of little New River about three miles north of Richlands, Onslow County, North Carolina.
He made claim by land grant on a 640 acre tract of land between Cox's run or mill bridge, Jenkins branch on the east, Cattail branch on the north, back to mill run on the west, down this mill run to mill bridge place of beginning. This area, now known as Hominy Swamp, lies between Ervintown section and Huffmantown community.

Charles Cox I built a water mill at the mill bridge site about 1745-1750 and settled down to fulfill sealing his rights of ownership by clearing and cultivating three acres for each one hundred within a three-year period, entering these letters with the auditors within six months in testimony - witness dated the 21 day of May, 1741.

The Charles Cox I family was a strong hardworking colonial family who worked early and late to help make America great. His wisdom and pioneering spirit has been continued through his bloodline more than two hundred and forty one years in Onslow County.

The Charles Cox, Jr. family story begins when Charles Cox, 1, his father, willed the homeplace, including the grist mill, whereon he lived. Charles, Jr. , being the first and oldest son, was assigned the duty of keeping his brother, Jesper, two sisters, Susanna and Sarah, and Rebecca, his widowed mother, family unit together. Charles, Jr. settled down and fulfilled this assignment.

NEW Valuable information from Jim Jarman (I lost his e-mail and request that he contact me again): "I solved the mystery of Uerrania Cox, daughter of Charles and Sally Thompson Cox. The Mormon Church data bank has her born August 9, 1808, to Charles and Sally Thompson Cox of Onslow Co., NC. I know this conflicts with your records but this information is solid, I believe.
I stumbled on your site quite by accident. I knew Cox was one of the names in my Jarman family history. Eli Cox, your gr-grandfather I believe, was the son of Durant Cox and Mary Ann Jarman. Mary Ann Jarman was the daughter of Braddock Jarman and Mary Adams. Braddock Jarman was my gr-grandfather Willoughby Jarman's uncle. Further, Eli Cox and Willoughby Jarman [along with five of his brothers] served in Company A of the 35th Regiment of the Confederate States of America. Adding mystique to this story is the fact I wrote a book [fiction, so far unpublished] about all the battles you mentioned. How our gr=grandfathers survived the horrible carnage and suffering is more than one can imagine. Willoughby was also wounded but survived until the end. He also was captured at the Battle of Ft. Stedman, and imprisoned at Pt. Lookout. I know they had to know each other, cousins, both from the same area, maybe even friends. In the fiction of my book Eli and Willoughby were close." 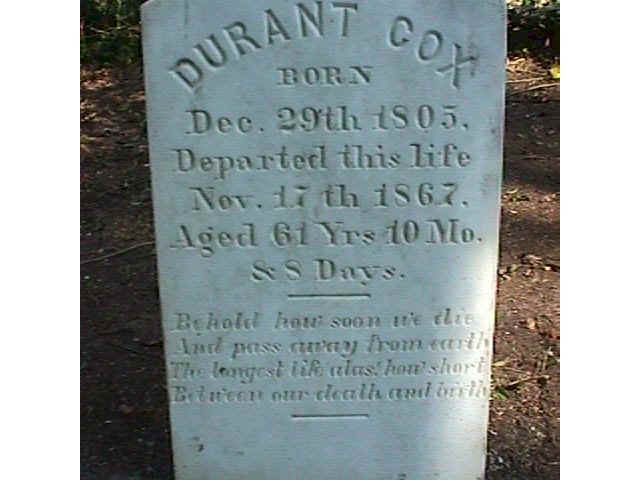 Durant Cox was born December 29, 1805, about three miles north of Richlands, Onslow County, N.C. He was administrator to settle his father, Charles Cox's estate between two sets of children. Durant married Mary Jarman, May 28, 1883, three years after his father married Elizabeth Foster, his second wife, who bore two children by this marriage: Miriam who married Haskel Marshburn, and Harmon (unmarried) who served in the great Civil War and died while in service, Confederate Army.

Durant Cox and wife Mary Jarman were hard-working farmers and mill operators. They built the Cox Mill on the Cox's Mill Run during the year of 1850. This mill operated for about seventy years in the crossroads of survival on the farm, now owned by the Reuben Cox heirs: Anthony, Eleanor, Alice, and Orville Cox. 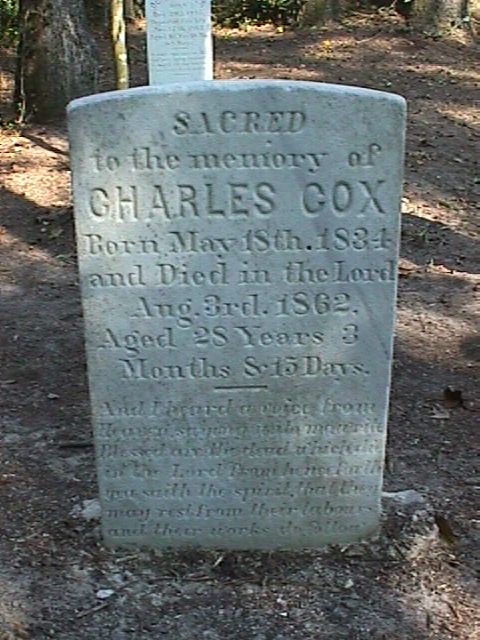 Durant Cox died November 17, 1867 , at age 62. He was a highly respected -citizen of Onslow County who was a good father, a good husband, a good neighbor, and a man who believed in God and helped build the Methodist Church in Richlands and New Haw Branch Church -1856 and 1861. He also served on the local school board. A.J. Johnson, Clerk to the Board. 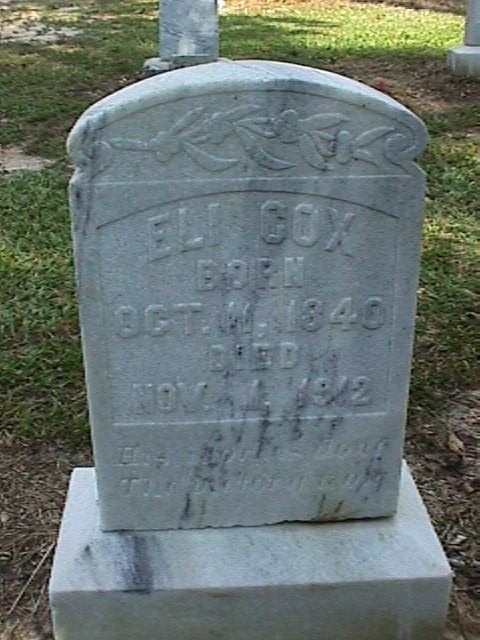 Eli Cox, son of Durant Cox and Mary Jarman, was born October 11 , 1840, about three miles north of Richlands, Onslow County, N.C. A man of small stature, his story is a very colorful one. He married Huldah Shaw, daughter of Reuben Shaw about 1875 and died suddenly the morning of November 1 , 1912. They were affectionately known as Uncle Eli and Aunt Huldah. One son was born of this union: Arthur Crispus Cox, Eli Cox was wounded in the Confederate Army when Grant took Richmond. The bone in his leg below the knee was shattered by a piece of artillery shell which he carried to his grave.

Heavy responsibility was placed on his shoulders when his father, Durant, died November 17, 1867. The Reconstruction days bankrupted this family. He was a prisoner of war, discharged by the Provost Marshall's office June 2l, 1865, and pledged by oath and did solemnly swear to support, protect, and defend the Constitution and Government of the United States of America.

The 1870 census shows the Eli Cox family as: Eli, age 29; Mary, his mother, age 68; and Mary, age 36. Eli Cox was a farmer, grist miller, soldier - honest as the days are long. He accepted the Lord Jesus as his personal savior when he was old and gray, but when he repented, he was a soldier for the Lord. His story goes that he was true witness for God all the rest of his life and did much preaching to the vast number of people who brought their grain to his mill. 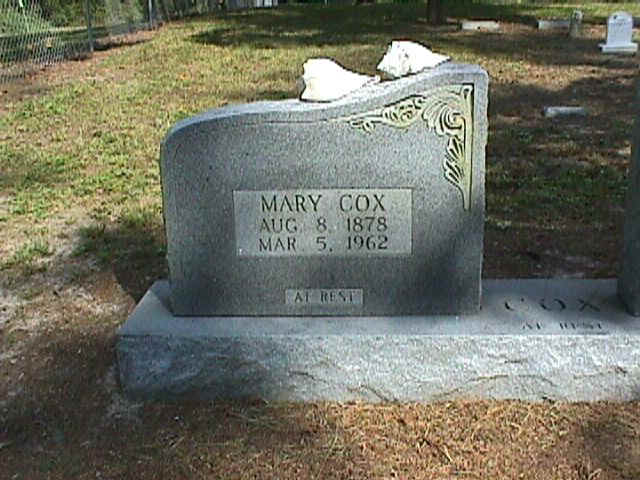 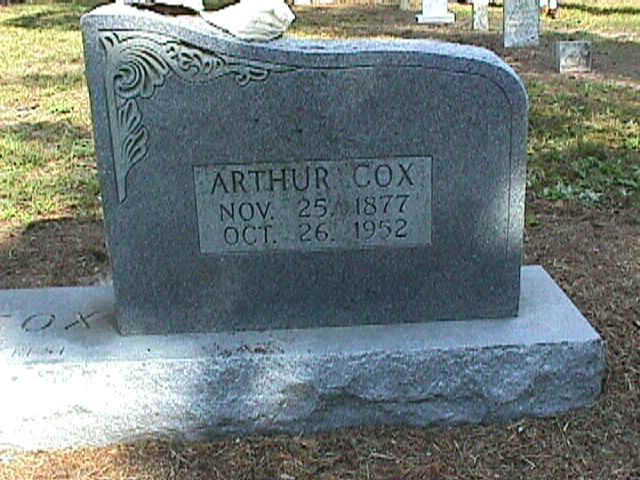 Arthur Crispus Cox, born November 25, 1877, in Richlands in Onslow County, N.C. He married Mary Elizabeth Canady about the turn of the century. She was the daughter of Joseph Canady and Eliza Jarman. Eliza Jarman, daughter of Braddock Jarman, as shown on 1850 census. She was born August 8, 1878, and died March 5, 1962.

Arthur Crispus Cox was a man of many trades; gifted with the energetic ability to rear a family of nine children, five boys and four girls. He died October 27, 1952, at age 74.
Mary Elizabeth Cox was a God-fearing, hard-working Christian, born-again child of God, who along with Arthur Crispus Cox, her husband, genuinely loved people. Both were very wise in the philosophy of life. She died March 5, 1962, at age 84. Children of this union: 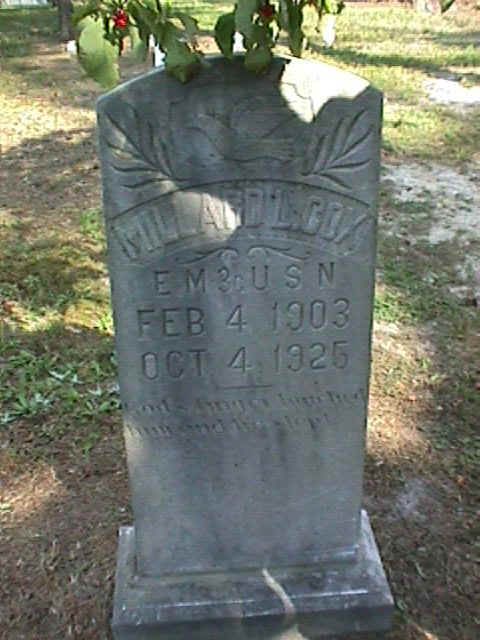 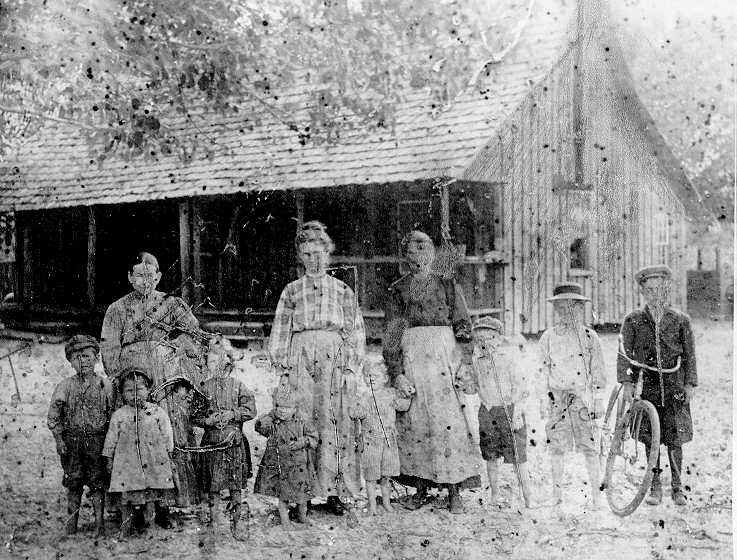 Circa 1913 - From Left: Mary Canady Cox's sister, Annie - standing with three infants. The middle child is believed to be Annie Mae Cox. Mary Canaday Cox is believed to be holding the hands of Woodrow and Reuben. Grandma Huldah Shaw Cox is holding the hands of Reuben and Hugh. Millard and Joseph are on each side of the bicycle.  The photo appears to be taken on day when leaves were still on the trees, but long sleeves and bare feet were comfortable.

WOODROW W. COX (He was my Uncle and my Father's younger brother. Uncle "Bo" was a published writer and poet. He loved genealogy and collected most of the materials of this web site. He worked as an insurance representative of Jefferson Standard - all of his family regarded him as their insurance agent. Dennis Rogers of the Raleigh News and Observer  wrote an article on his achievements. He passed away in 1996 leaving us only with memories of his creativity, common sense and energy. He is survived by his wife, daughter and grandchildren.)

Woodrow W. Cox, was born September 26, 1911, in the same farm locality his father, Arthur Cox, his grandfather, Eli Cox, and great-grandfather, Durant Cox, were born. This plat of land has been in the Cox family for over 240 years.

Woodrow W. Cox, man of many talents, farmer, carpenter, salesman, writer, poet, publisher, businessman and a person who loves people. Many good things could be said in his behalf, but the feature article on his life written August 19, 1980 for The News and Observer states it best: "Ordinary Man Lives a Purposeful Life." Not many left.

"THE TREACHEROUS PATH''
"We are not all saintly persons, I would not have you think,
The path I walk is treacherous, I'm always on the brink.
Perhaps you, too, should realize that to be good men and true
Is to think and act our very best, is the least that we should do."
- By: W.W. Cox

The Cox families of Onslow County have a very rich heritage dating back even before 1741. I'm proud to be written up as one of them.